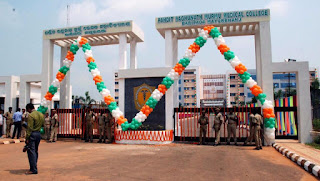 Bhubaneswar, August 6, 2017: Chief Minister Naveen Patnaik on
Wednesday dedicated Pandit Raghunath Murmu Medical College and Hospital (PRMMCH)
at Baripada to the people of the Odisha. With the establishment of the college,
a long-awaited dream and aspiration of people of Mayurbhanj has become a
reality.
With the inauguration of the fifth State-run medical college and
hospital, classes for the first batch of MBBS students also began. 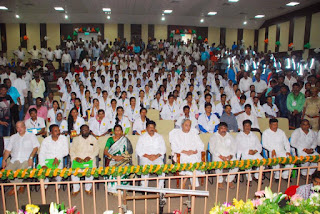 The CM congratulated the students of the first batch at the
medical college.
“Medical college is a tribute to great social reformer Pandit
Raghunath Murmu, Maharaja Sriram Chandra Bhanja Deo and Biju Patnaik who
believed in multi-disciplinary approach for health and developmental problems
of tribal areas,” said Patnaik.
He asserted that the State Government is working earnestly
towards promoting health of the people
“In 2000, the number of MBBS seats in the State was 321. This
year it has gone up to 850 and will cross 1000 next year,” asserted the Chief
Minister.
Chief Minister welcomed the students and faculty to the college
and hoped that they will work with the vision of giving back to the community
and empowering the less privileged.
Deputy Speaker of the Assembly Sanada Marandi, Health and
Family Welfare Minister Pratap Jena, department Secretary Pramod Meherda among
local MLAs and MPs were present.