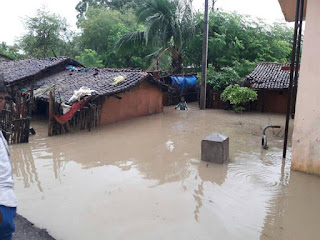 Bhubaneswar, July 18: Special Relief Commissioner (SRC) Bishnupada
Sethi has asked the Collectors of 12 districts to be vigilant in view of IMD
forecast of heavy to very heavy rainfall in the districts, triggered by a
depression, formed over the north-west and adjoining west-central Bay of Bengal
and coastal Odisha and centred about 80 km south-southeast of Puri.
The depression is likely to cross Odisha coast between Gopalpur
and Puri by Tuesday night.
Fishermen in coastal areas have been advised not to venture
into the sea.
The district where heavy to very heavy rainfall is expected
in the next 24 hours are Nabarangpur, Kalahandi, Rayagada, Kandhamal, Nuapada, Balangir,
Sonepur, Boudh, Bargarh, Nayagarh, Ganjam and Angul.
The Collectors of Rayagada, Kalahandi and Nabarangpur have
been asked to be extra careful as the three districts have already been
affected by flood.
Flash flood caused by heavy rain last week affected hundreds
of people and inflicted damage to road network in the districts.
People were promptly evacuated by relief officials and free
kitchens were arranged for the affected people. Restoration of damaged roads
and bridges were also taken up on war footing.
Distribution of emergent food assistance is going on in all
the three districts, as per the direction of the SRC.