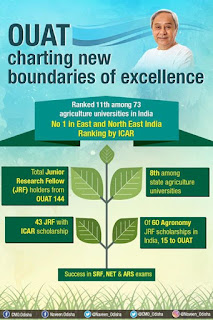 Bhubaneswar, July 18: Chief Minister Naveen Patnaik on
Tuesday congratulated the Orissa University of Agriculture and Technology
(OUAT) on being ranked among the top Agriculture universities in India by
Indian Council of Agricultural Research (ICAR).
OUAT has been recognised by ICAR as No 1 agricultural
university in whole of Eastern and North Eastern India while being ranked 11th
overall in the country among 73 universities that include state, central and
deemed universities. Among state universities, it ranks 8th. It also leads in
scholarships and fellowships at all levels of ICAR.
“I am happy that OUAT is playing a transformational role in
agriculture development and farmers’ empowerment in state as well as the
country. Its enabling academic environment has been successful in tapping the
potential of students and encouraging them to chart new frontiers in research
and applications for benefit of agriculture and the farmers,” said Patnaik in
his Facebook page.
“It is on the forefront of using advanced scientific
knowledge and technological innovations to give new direction to farm sector
and improving livelihoods for farmers in our State,” added Patnaik.
The CM also congratulated students, faculties and
administrators of the university for this national level recognition.

Niranjan slams Naveen for fall in tiger population in Odisha

Sports climbing complex at Kalinga Stadium by May next