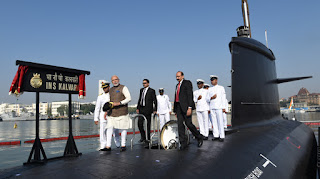 Mumbai, December 14, 2017: Prime Minister Narendra Modi on
Thursday dedicated the naval submarine INS Kalvari to the nation, at a function
in Mumbai.

The Prime Minister described INS Kalvari as a prime example
of “Make in India” and as an excellent illustration of the fast growing
strategic partnership between India and France. 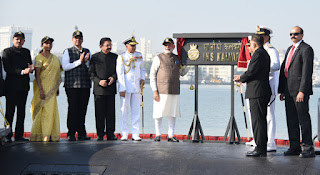 “The 21st century is described as Asia’s century. It is also
certain that the road to development in the 21st century goes through the
Indian Ocean. That is why the Indian Ocean has a special place in the policies
of the Government,” said the PM. 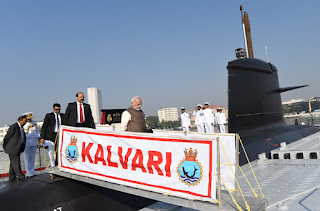 The Prime Minister said this vision can be understood
through the acronym SAGAR – Security and Growth for All in the Region.
The Prime Minister said India is fully alert with regard to
its global, strategic and economic interests in the Indian Ocean. He said that
is why the modern and multi-dimensional Indian Navy plays a leading role in
promoting peace and stability in the region.
The Prime Minister said that the entire ecosystem related to
defence and security has started to change in the last three years. He said the
skill-set accumulated during the manufacture of INS Kalvari is an asset for
India.
The INS Kalvari is a diesel-electric attack submarine that
has been built for the Indian Navy by the Mazagon Dock Shipbuilders Limited. It
is the first of six such submarines that will be inducted into the Indian Navy,
and represents a significant success for the “Make in India”
initiative. The project has been undertaken with French collaboration.
Kalvari is a potent Man o’ War capable of undertaking
offensive operations spanning across the entire spectrum of Maritime
Warfare.  She embodies cutting edge
technology and compares favourably with the best in the world. She has an
overall length of 67.5 metres and a height of about 12.3 metres.  The hull form, the fin and the hydroplanes
are specifically designed to produce minimum underwater resistance. Her 360
battery cells (each weighing 750 kg) power the extremely silent Permanently
Magnetised Propulsion Motor. Her stealth is further enhanced through the
mounting of equipment inside the pressure hull on shock absorbing cradles.
The Boat’s undersea warfare capability comprises a cluster
of advanced weapons and sensors integrated into the Submarine Tactical
Integrated Combat System (SUBTICS). The sonar suite is Low Frequency Analysis
and Ranging (LOFAR) capable enabling long rage detection and classification.
Post classification, she may choose to engage the enemy by utilising either the
sea skimming SM 39 EXOCET missiles (Flying Fish in French) or the heavy weight
wire guided Surface and Underwater Target (SUT) torpedoes.  Towards self-defence, she is fitted with
mobile C303/S anti-torpedo decoys.
The boats attack and search periscopes are equipped with
Infrared/ Low Light Level cameras and Laser Range finders. The boat also has
her two 1250 kW MAN Diesel Engines for rapidly charging batteries. The
submarine boasts of a highly advanced Combat Management System and a
sophisticated Integrated Platform Management System.