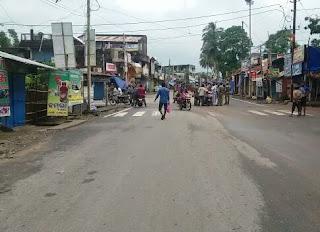 Balasore, Sep 13: Although no fresh untoward incident took place in
the violence hit Soro in Balasore on Tuesday, the dusk-to-dawn curfew would
continue to be in force to prevent any further violence, said Balasore SP Niti
Sekhar.
Due to the Eid festival, prohibitory orders under Section 144
of CrPC were partly lifted between 8 am and 2 pm to allow the Muslim community to
hold prayers and perform their religious practices. However, religious procession and rallies were banned.
Meanwhile, the number of arrests in connection with the group
clashes during the Ganesh idol immersion since Friday has increased to 13.
“Security forces will continue to take their positions as
before,” said the SP.
Tension has prevailed in Soro town since Friday night
following violence during immersion of Lord Ganesh idols. Prohibitory orders
have been clamped since Saturday morning.
Meanwhile, the Peace Committee decided to immerse remaining
Ganesh idols between 9 am and 11 am on Wednesday in low profile manner.