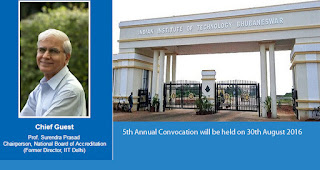 Bhubaneswar, Aug 29: A total of 241 students, including seven
doctoral candidates, would receive their degrees at IIT-Bhubaneswar’s 5th
Convocation Day here on Tuesday.
The graduating students this year include seven PhDs, 55 MTechs,
69 MSc and 110 BTEch students.
The ‘President of India Medal’ would be bestowed on Priyam
Dey of the School of Electrical Sciences for best academic performance among
the entire outgoing BTech batch, while the Director’s gold medal would be
awarded to Shubhashree Subudhi of the School of Mechanical Sciences for best
academic performance among the entire outgoing MTech batch, said
IIT-Bhubaneswar Director Prof RV Raja Kumar told reporters here.
The Director’s gold medal would be awarded to Shweta Singh
of the School of Earth, Ocean and Climate Sciences for best academic performance
among the entire outgoing MSc batch, he said.
For the best academic performance in the respective schools,
the institute silver medals would be awarded to Pranay Gour, Priyam Dey and
Bodepudi Revanth among the outgoing BTech batch, he added.
National Board of Accreditation Chairman and former IIT
Delhi Director Prof Surendra Prasad would deliver the convocation address. The
function would be held at the Community Centre of the institute at its
permanent campus in Argul near Jatni, he added.
Board of Governors of IIT Bhubaneswar Chairman Pankaj
Ramanbhai Patel would preside over the convocation.
Sharing the achievements of the institute, the Director said
on July 14, the institute inaugurated academic operations in the School of
Electrical Sciences, School of Basic Sciences and School of Infrastructure at
the campus at Argul. About 80 per cent of the academic operations are taking
place at the campus, he added.