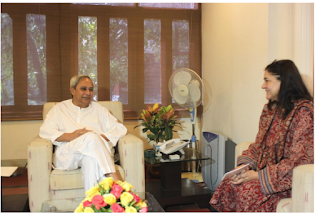 Bhubaneswar, July 21: Maintaining that at least 3,385 Urban
Centres in the State do not have their own pucca Anganwadi buildings, Chief
Minister Naveen Patnaik on Friday urged Union Women and Child Development
Minister Maneka Gandhi to provide Rs 250 crore for construction of Anganwadi
buildings in these Centres.
Patnaik met Gandhi at Odisha Bhawan in New Delhi today.
The Chief Minister stated that the ongoing Integrated Child Development
Services Programme needs to be further strengthened and urged upon the Union
Minister to enhance the approved rate for supplementary nutrition, approve at
least one Anganwadi Centre or Mini-Anganwadi Centre for every hamlet in the
tribal areas irrespective of population and increase the honorarium of Anganwdi
Workers and Helpers.
In addition, the Chief Minister mentioned that Central Share
of funds under the Integrated Child Development Services Scheme should be
released timely to ensure uninterrupted implementation of the Scheme.
The Chief Minister also underlined the need to create
service delivery structures under District Child Protection Unit (DCPU) at Gram
Panchayat level or at least at the Block level for better implementation of the
Juvenile Justice (Care and Protection of Children) Act, 2015 and Integrated
Child Protection Scheme (ICPS).
“Donations made to Juvenile Justice Fund may be exempted
from Income Tax to mobilise additional resources and that Government of India
may consider setting up an exclusive Juvenile Justice Academy in the State,”
Patnaik said.
Union Minister appreciated the efforts being made by Odisha
to improve the nutritional status of pre-school children and pregnant and
lactating mothers. She informed that the State of Uttarakhand has introduced an
innovative feeding system of providing nutritional mix of millets and peanuts
in sachets for supplementing the nutritional needs of pre- school children and
mothers. She suggested that Odisha may consider adopting a similar feeding
system.
Union Minister also referred to seven One-Stop Centres for
Women sanctioned for Odisha and desired that these may be made operational
early. She said that in case Odisha desires, more of such Centres could be
sanctioned to the State.