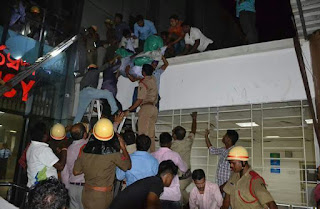 Bhubaneswar, Oct 18: The Siksha ‘O’
Anusandhan University, which runs the Institute of Medical Sciences and Sum
Hospital, on Tuesday announced an ex-gratia of Rs 5 lakh each to the victims’
families.
“The hospital authorities and the
management have decided to extend an ex-gratia of Rs 5 lakh to the family of
each deceased,” said SOA university vice chancellor Amit Banerjee.
“Several people also suffered minor to
severe injuries during the rescue and evacuation operation and are undergoing
treatment in several government and private hospitals. We firmly stand by these
patients and have decided to bear cost of treatment of these patients,” added Banerjee.
He said since the Government has
ordered two inquiries, one headed by the RDC (Central Division) and the other
headed by the Director, Medical Education and Training, they will extend all
possible cooperation to these inquiries initiated by Government.
The hospital authorities have also
instituted an internal inquiry committee to go into the incident to find out
the causes of the accident and systemic fault if there was any, he added.
“Only the medicine ICU and dialysis
unit have been affected in the accident. The operation of the rest of the hospital,
including all the departments) are unaffected and functioning smoothly today,”
said Banerjee.
The Management of the Siksha ‘O’
Anusandhan University have declared seven days mourning and closed all the
constituent institutes of the University today as a mark of respect and homage
to the departed souls.

Bhubaneswar under tight security ahead of I-Day