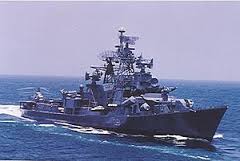 Bhubaneswar,
Nov 12: As part of Navy Week celebrations, two warships of the Eastern Fleet
namely INS Rajput and INS Kora were opened for visit by children and the public
at Paradip for last two days.
A
large number of public from all walks of life visited the ships and were taken
on a guided tour of the ships and briefed about the diverse weapons and
equipment fitted onboard.
INS
Rajput is the first of modified versions of the Soviet Kashin quided-missile
destroyer retrofitted with a state-of-the-art weapons and sensor package
designed for multi-dimensional combat operations. The ship is also a potent
Anti-Submarine Warfare platform with indigenous sonar and an integral Kamov
helicopter which can seek and destroy submarines. INS Kora is a missile
corvettes are indigenously designed and built by Garden Reach Shipbuilders and
Engineers (GRSE), Kolkata.
The ship’s armament include surface-to-surface
missiles, MR gun and close range anti-missile defence which enable the ship to
assume a significant role in protecting sensitive harbours and coastal
installations.
The
visitors were explained on various naval evolutions and operations by means of
photo boards and projection systems. The visitors had opportunity to interacted
with Men in White and experienced life in the Navy from close quarters with
considerable excitement.