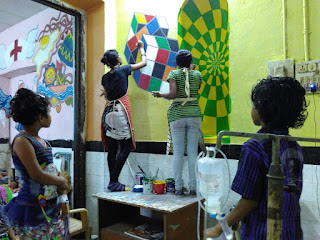 Cuttack, Nov 15: The Sardar
Vallabhbhai Patel Post Graduate Institute of Paediatrics (Sishu Bhawan) here is
the leading children’s hospital in the State, has become a child friendly space,
thanks to an artistic makeover by Bakul Foundation.
Health Minister Pradeep Kumar Amat and
department Secretary Arti Ahuja dedicated the facility on Tuesday.
Bakul Foundation had been invited by
the Health Secretary to make Sishu Bhawan into a bright and beautiful place
where art has a therapeutic effect on children. The makeover of Medical Ward II
(a heritage building) led by Satyabhama Majhi took about two months and was
dedicated to children.
This heritage building of Sishu Bhawan,
which was once the Governor’s house, is now a place where history meets the
contemporary as contemporary art has given a new life to the historical
building. The high pillars have taken on colours and the façade itself looks
bright and beautiful but its only a teaser for the art works inside. 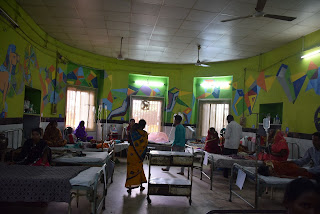 The painting is in layers just as the
halls and faeries on the walls usher us into the magical space inside, which
one might forget is a hospital. The room one enters has a play of day and night
on the two sides, with one dark and the other light and nursery rhymes
describing that written on the walls. The element of children’s play has been
interwoven into the paintings. Hence, the play on day and night through paper craft
very popular with children is also on the walls.
Similarly, other elements of play such
as dice and rubik’s cube have been depicted on the walls inside in a 3D effect
along with other illusions for which the nooks of the old building lend
themselves beautifully. Inspiration has also come from elements found in the
hospital itself like a red balloon with polka dots that a child was playing
with.
Each wall was like a painting with its
distinctive style such as applique design in one room. In another hall, there
are geometric lines that are intended to both soothe and distract patients from
the anxious moments and works like a puzzle that they need to figure out. The
end result offers “a visual experience that worked a bit like finding your
way”. The paintings are a mixture of the real and abstract. There is a child
sitting on the back of his mother in one and a geometrical wooden horse in the
other. One of the rooms also has aspects of children’s art, their pencil
drawings and the way they draw figures.
Sishu Bhawan is now not only a
hospital for children but a model children’s hospital that will show the way to
children’s hospitals in India on how art can alleviate pain and create an
entirely different atmosphere for effective and integrated medical care.

One more Air India flight from Bhubaneswar Airport from Sunday