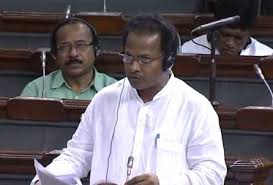 Bhubaneswar, Nov 30: Expressing concern over alarming level
of milk adulteration in the country, Balasore MP Rabindra Kumar Jena has urged
the Union Government to bring a strong legislation to stop adulteration of milk
and to take concrete action against the culprits involved in the offence.
Raining the issue in the Lok Sabha in the ongoing Winter Session
of the Parliament Jena urged the Health and Family Welfare Ministry to act in this
regard in a proactive manner.
Thanking the Minister of State for Health and Family Welfare,
Faggan Singh Kulaste for taking swift action on his concerns, Jena posted this
issue on social media.
“Not only a newborn child or a senior citizen, Milk is
consumed by each one of us. Thus Milk is a very critical commodity. We recall
the hue and cry which broke out when Maggi was declared unsafe for consumption
and everyone was discussing that issue. However, when it comes to milk, a
staple diet, nobody seems to be
concerned about the grave situation we face. That’s why I raised my
concerns in the house,” wrote the MP on Facebook.
“As important as it is to detect adulteration, we must ensure
stringent punishment for adulterators. It must be noted that milk adulteration
is a heinous crime, which may kill millions,” he added.
Appreciating Jena’s concern raised on August 11, Kulaste
wrote that, weighing the seriousness of the issue the ministry has formed a
committee to undertake a comprehensive review of the Food Safety and Standards
(FSS) Act, 2016 and rules and regulations made there under. He also informed
that FASSAI has initiated the National Milk Quality Survey (MQS)-2016 on pilot
basis in states like Delhi, Haryana and parts of Utter Pradesh. The samples
will be drawn both from the organized and unorganized sectors and tested for
Fat, Solid Not Fat (SNF) and 13 common adulterants for understanding the type
of milk being sold in the country.
Jena was also assured by the Ministry for taking necessary
remedial steps in due course of time.