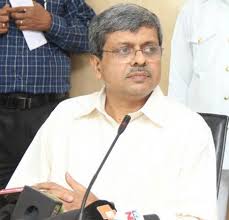 Bhubaneswar, Dec 10: Chief Secretary Aditya Prasad Padhi has
asked the concerned authorities to credit the entire argi-insurance money to
the bank accounts of farmers.
He was conducting a district-wise review of the progress of
argi-insurance money transfer through a videoconferencing on Friday. He wanted
to ensure 100 per cent disbursement maximum within 15 days.
Development Commissioner R Balakrishnan who attended the
review meeting advised the banks to open parallel savings accounts of the
loanee farmers within two to three days and credit the insurance money to their
savings accounts.
Cooperation Principal Secretary Manoj Ahuja appraised that
this insurance claim is being given against kharif crop loss of 2015. Around
11.61 lakh farmers would get the benefit. A total amount of around Rs 1,776
crore would be distributed through the farmers’ bank accounts. So far, about Rs
880 crore has been credited to the accounts.
The Chief Secretary directed the Collectors to keep close
watch over the situation and ensure 100% disbursement of the compensation money
to account of the famers. He also directed the collectors to review the
situation on daily basis with commercial and cooperative banks and send the
updated report to Principal Secretary Cooperation through WhatsAap messages.
Further, Chief Secretary clarified that since the
agricultural loan term is up to the month of March, no bank should adjust the
insurance money against the loan of current year. The non-defaulter loanee
farmers up to the last year should be disbursed 100% of the insurance money.
The Collectors were also asked to ensure 100% disbursement of
draught assistance against Kharif-2015. Near about Rs 83 crore would be
distributed to draught affected farmers in 24 districts at the rate of Rs 100
per quintal of paddy.
Special Relief Commissioner Pradeep Kumar Mohapatra present
in the video conference appraised that the entire money has been placed with
Secretary Central Cooperative Bank. Collectors were directed to complete the
disbursement within three-four days.
Principal Secretary (Finance) Tuhin Kanta Pandey, Joint
Director (Planning) Jayanta Kumar Mishra, Principal Secretary (Agriculture) Monaj
Kumar Ahuja, (Water Resources) Pradeep Kumar Jena along with senior officers
from concerned departments participated in the meeting.

BDA to build 2900 houses for weaker sections in Bhubaneswar