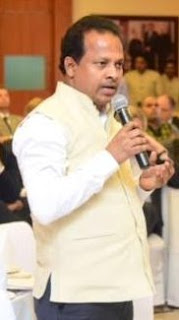 Bhubaneswar, Dec 15: In a bid to boost the State’s tourism
sector, BJD MP from Balasore Rabindra Kumar Jena has sought the
Union Government to give the Chandaneswar Shiva Temple of the district national
and historical recognisation.
In a letter to the Union Home Ministry Jena said, “Given the
magnitude and religious sentiments attached to the temple and its rituals, I
request the Government of India to Recognise the Chandaneswar Shiva Temple as a
site of historical and national importance.”
Citing the problem occurred due to huge arrival of pilgrims
at the Annual Festival of the temple on Pana Sankranti the MP wrote “The
existing infrastructure in and around the temple area is not adequate to handle
this annual festival. Hence I request the Union Government to provide financial
and technical support for infrastructure development in this area.”
Keeping in view the proximity of the temple with the sea
coast and vulnerability of terrorist activities, Jena has also asked the
government to deploy adequate central forces during the festival.
In response to Mr. Jena’s request, the concerned minister Rajnath
Singh has wrote back that the matter has been noted and being examined for
appropriate action.