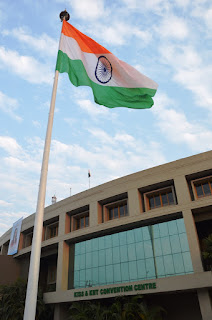 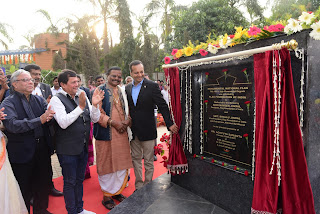 Jindal said, “When a person displays the National Flag, he
rises above political, social or religious affiliations. The Tiranga unites us
in diversity; it is every citizen’s pride.”
Dr Samanta appreciated Jindal for honouring his commitment
before the students made six months ago during his visit to the KISS last year.
Jindal had announced to instal this monumental flag. The flag is made of
knitted polyester fabric called ‘Deneir Polyester’. The chakra of the flag is
printed by using specialised printing process.
In all, the FFI has installed 66 monumental flagpoles in
India which is the highest number in the world for a country. Besides India,
there are 13 more countries, which have got such monumental flagpoles. The
concept of the monumental flagpoles in India was conceived and introduced by
Jindal in 2009. This was introduced after a policy decision by the Union
Ministry of Home Affairs, which allowed the National Flag to fly day and night
on a flagpole of a height of 100 feet and above with proper illumination.