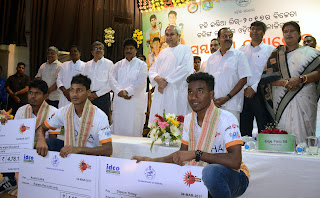 Bhubaneswar, Mar 4: Chief Minister Naveen Patnaik on Saturday
felicitated Odia players of Hockey India League 2017 champions Kalinga Lancers-
Dipsan Tirkey, Nillam Xess, Anand Lakra and Amit Rohidas, and expressed his delight
over their role in leading the team to victory.
The Chief Minister presented the budding stars of Indian
hockey with cash prize of ₹ 5 lakh each as appreciation and encouragement to
achieve heights of excellence.
“The crowning of Odisha’s own team as champions of the top
hockey league in the country and internationally is a glorious moment for our
State. Success of Kalinga Lancers team is epoch-making for Odisha hockey. It
has not only provided the chance to Odia players to play with national and
international players but also popularised hockey among the people,” said
Patnaik in a ceremony organsied at Jaydev Bhavan to felicitate the players.
Maintaining that Odisha has long been a nursery for hockey
and given India many brilliant players who have made their mark nationally and
internationally, Patnaik said Indian hockey has been led by three captains from
the State in men’s team and two in women’s team. Besides, four Odia women
hockey players were part of National team in the Rio Olympics in 2016.
“Our State has already gained prominence in the international
sporting map. Bhubaneswar has successfully hosted the prestigious eight-nation
FIH Champion’s Trophy Men’s Hockey Tournament in 2014 and is set to host the
Hockey World League Final in December 2017 and the topmost of them all-Hockey
World Cup in December 2018,” said Patnaik.

Odisha Govt hikes DA by 6% for its employees