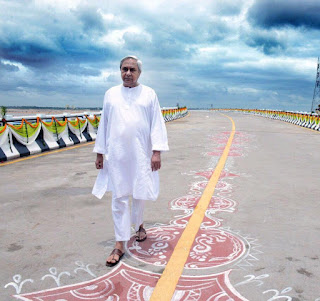 Bhubaneswar, August 15, 2017: Chief Minister Naveen Patnaik,
who felt ‘mildly’ sick while he was delivering his Independence Speech at
Mahatma Gandhi Marg here on Tuesday, said he is perfectly fine now after taking
two glasses of nimbu water and would attend all pre-scheduled events for the
day  today.
“Should have had adequate water for parade in sunny humid
conditions. Standing under the sun felt little dehydrated. Perfectly fine now
with two glasses of nimbu pani,” Patnaik took to the twitter to inform about
his health condition to his well wishers.
“Attending the rest of days programmes as scheduled. Must
tell all of you to drink adequate water before going out in the sun to avoid
dehydration. Thank you all for your wishes and wish you all a Happy
Independence Day!,” the CM further tweeted.
The CM, while reading out his written speech earlier in the
morning today at the State-level Independence Day celebration in the State
capital, was seen heavily sweating. After he stared reading the speech, his
voice gradually got slower and he could not finish it.
The CM’s personal security officer present on the podium
immediately arranged a wooden chair for him where the CM sat for a few minutes
to recover from the instant sickness. Security personnel exposed a standing
air-conditioner towards the CM to reduce to his sweating.
Chief Secretary Aditya Prasad Padhi and Director General of
Police K B Singh who were also present near the podium appeared quite worried
over the CM’s uneasiness and the Chief Secretary was seen asking him if he was
feeling alright or required immediate medical assistance.
Meanwhile, security personnel alerted the ambulance and
medical staffs. An ambulance deployed in the carcade of the CM was kept ready
to rush the CM to the Capital Hospital. The CM, however, kept sitting on the
chair for a few minutes.
After he recovered a little, the CM returned to his residence
‘Naveen Niwas’ where doctors from Capital Hospital treated him.
Minutes later, the Chief Minister’s Office clarified that Patnaik
was quite well and he would attend all his official programmes scheduled for
the day.