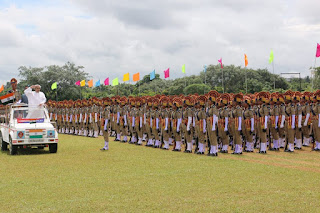 Bhubaneswar, August 28, 2017: In a first-of-its-kind initiative,
Odisha Government on Monday raised its own Odisha Industrial Security Force
(OISF) in order to provide an integrated safety and security cover to the industrial
establishments in the State.
The first batch of the 1,289 recruits, including 203 women of
the newly raised force has undergone 10-month training. Chief Minister Naveen
Patnaik greeted them at the passing out parade of the first batch recruits at
the Seventh Battalion Ground here. For the first time, women police personnel have
been included in the armed police in the State.
The OISF personnel have undergone basic police training and
specialised training on industrial security with the help of Central Industrial
Security Force (CISF). On April 30 last year, the State Government had
recruited the constables.
Purnima Mohapatra bagged medal from the CM for being the
overall topper of the first batch.
CM Patnaik said OISF will play a vital role in promoting
peaceful industrial atmosphere in the State.
“The OISF personnel have been imparted the requisite
professional skills in industrial security in addition to the normal police
training. They will be mobilised in different industrial establishments,” said
Patnaik, adding that Odisha has achieved attractive investment destinations in
the country and the OISF will contribute immensely to the economic growth of
the State.
OISF would function under the administrative control of the
Special Armed Police (SAP) of the State.
Sources said the OISF personnel will be deployed at the Odisha
Mining Corporation (OMC), Hirakud dam, IIT-Bhubaneswar, NTPC-Sundargarh, RBI State
headquarters and some prominent private industrial establishments.