Skip to content
Cuttack, September 16, 2017: The three-day 65th edition of
Odisha Police Duty Meet-2017 for personnel of the State police began at the Reserve
Police Ground at Buxibazar in Cuttack in order to improve efficiency in police
functioning and inculcate sense of professionalism and quality in policing. 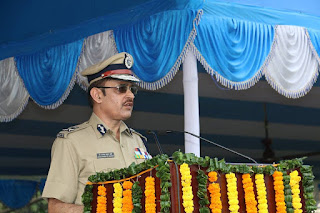 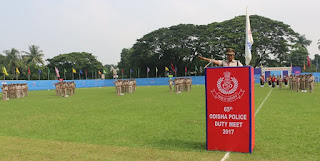 Director General of Police (DGP) Dr RP Sharma inaugurated the
edition and received the ceremonial salute in a colourful parade organised
exclusively for the purpose
The police duty will culminate in a grand way on September 16
where Chief Minister Naveen Patnaik will be the chief guest.
“Police Duty Meet is an occasion in which a police officer
gets an opportunity to display his/her talent and skills,” said Sharma.
As many as 187 competitors and 21 K-Nine (Dogs) from 37
Police Districts are participating in this mega annual event. Out of this there
are 40 Inspectors, 48 Sub-Inspectors, 43 ASIs and 56 Constables who are
participating in different events of the Duty Meet.
The Duty Meet which is scheduled to be held for three days
will witness competitions in varied policing subjects like observation and police
portrait, scientific aid to investigation, medico legal test, finger print identification,
lifting – packing and forwarding of exhibit, photography, DNA finger printing, technical
surveillance, cyber crimes, laws and rules and computer awareness test among others.
The successful competitors will be selected to participate in the All India
Police Duty Meet.
Many senior officers of the State police administration and also
some retired officers were present in this inaugural programme.