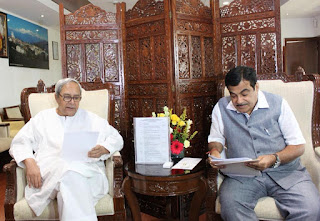 Bhubaneswar, September 27, 2017: Chief Minister Naveen
Patnaik on Wednesday met Union Road Transport and Highways Minister Nitin
Gadkari in New Delhi and discussed strengthening of national highways (NHs) in
Odisha.
The CM sought NH status for 30 State roads in Odisha.
“I discussed expediting work on important National Highways
passing through Odisha and strengthening of road transport network in Odisha
with Union Minister Nitin Gadkari,” said Patnaik after the meeting.
The CM also urged the Union Minister to approve the State
Government’s proposal to declare 30 eligible State Roads as National Highways
at the earliest. These roads covering 2,483 km will give a boost to regional as
well as National connectivity. Besides, there are 12 State Roads as NHs during
2015-16 to 2016-17. These are yet to be formally declared and numbered.
He also raised the considerable delay in execution of works
of several vital NHs in the State.
The strengthening and widening of 96 km stretch of NH 215
from Remuli to Rajamunda, 4-laning of NH 42 Cuttack-Angul, 4 laning of NH 23
Barkote-Panposh, 6-laning of NH 16 Chandikhol- Balasore and 4-laning of NH 200
Chandikhol-Duburi-Talcher have not been completed. The Railway over bridge near
Chandanpur and the 9 km bypass of Puri town were scheduled to be completed
before Nabakalebara-2015 but have remained incomplete.
Patnaik also pressed the Union Minister for construction of
flyovers at important locations on NH 16 like Khandagiri and Gohira Chhak,
which are congested and prone to accidents.
“The Union Minister assured me to accord priority to the pending
projects and actively consider proposal on declaring State Roads and National
Highways,” said Patnaik.