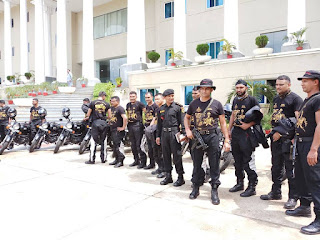 Bhubaneswar, September 1, 2017: The team of 42 NSG commandos,
who arrived in Bhubaneswar in a bike rally as part of the nationwide campaign
against terrorism was accorded rousing welcome by the Odisha police here at the
sprawling campus of the Bhubaneswar-Cuttack Commissionerate Police headquarters.
Director General of Police (DGP) Dr Rajendra Prasad Sharma,
Bhubaneswar-Cuttack Commissioner of Police YB Khurania among many senior
officials of the State police felicitated the 42 National Security Guard (NSG) commandos.

The team under the leadership of National Security Guard
(NSG) Deputy Commandant Amit Kumar has travelled eight States covering a
distance of 5500 km so far. 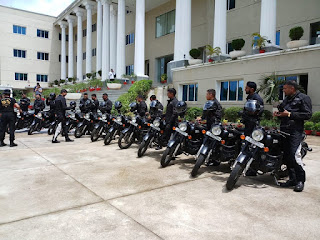 “Fight against terrorism is a collective responsibility of
the common citizens of India,” said NSG Deputy Commandant Amit Kumar.
DGP Sharma also extended heartiest congratulation to the team
members for their endeavour.
They are scheduled to cover another seven States covering
3000 km before they reach their base camp at Manesar in Haryana. The
expedition, with the theme ‘Fighting against terror: a collective
responsibility’, began on September 7 when the commandos took off on 15 Royal
Enfield motorcycles from Manesar.
Among others ADGP (Headquarters) Satyajit Mohanty, Additional
Commissioner of Police PS Ransipe also attended the felicitation programme.
The team is travelling across the country to commemorate the
NSG’s 33 years of service and to spread the message of collective
responsibility in the fight against terror. The Enfield Bullet has provided the
bikes.