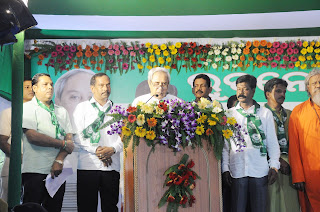 Bhubaneswar, October 11, 2017: Chief Minister and BJD president
Naveen Patnaik on Wednesday accused the national parties of creating an
‘atmosphere of uncertainty’ in the country, in an apparent reference to the
Bharatiya Janata Party (BJP).
Participating at the ruling BJD’s padayatra programme here,
Patnaik without taking name of any party said the prevailing atmosphere of uncertainty is not at all good in the
very interest of the country and called upon all to follow the ideology of Jay Prakash Narayan.
“Now, an atmosphere of uncertainty has been created in the
entire country. Policies and practices of the national parties are responsible
for this. It’s high time for all to strive for those democratic values and
ideologies which Jay Prakash Narayan had fought throughout his life,” said the Patnaik
while addressing a public meeting at Nayapalli here marking the 10-day of the regional
party’s foot march across the State.
The Biju Janata Dal (BJD) supremo’s fresh tirade against the
Centre came three days after he blasted the national parties for neglecting
Odisha’s interest and misleading people by projecting fake picture of
development.