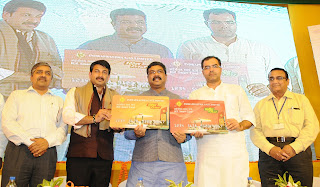 New Delhi, October 11, 2017: Union Petroleum and Natural Gas Minister
Dharmendra Pradhan on Wednesday launched the prepaid smart card (Retail and
Fleet) for CNG consumers here.
Pradhan said it will be easily available and benefit common
man in saving time in transactions at the CNG stations.
“This is an important step taken by GAIL and IGL for making
life easy for residents of Delhi. The initiative is part of Digital India
Campaign envisaged by the Prime Minister Narendra Modi to take country forward
with the help of technology,” said the Union Minister, adding that his Ministry
is making every effort to use technology and methods to provide time saving and
easily accessible customer service to consumers.
Referring to the challenge of environmental pollution, Pradhan
said answer to Delhi’s pollution lies in migrating its power plants, industrial
units besides domestic and transport usages to clean fuel.
“The Government is firm in its commitment to provide clean
CNG and PNG for cooking and transport at customer’s convenience to promote Gas
Based Economy,” added Pradhan.
Pradhan also distributed smart cards to some of the fleet as
well as retail customers of IGL. He also saw demonstration of smart cards
transaction after fuel dispensing at the CNG station.
Delhi MP Manoj Kumar Tiwari and Parvesh Verma, Chairman and
Managing Director, GAIL (India) Ltd BC Tripathi, Managing Director, IGL, ES
Ranganathan, senior officials, transporters and CNG customers were among those
who were present in the launch ceremony of the cards.