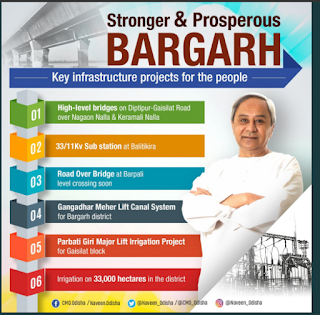 Bhubaneswar, October 17, 2017: To impress voters ahead of
by-poll in the Bijepur Assembly segment, Chief Minister Naveen Patnaik on
Tuesday dedicated various infrastructure projects, including two high-level
bridges on Diptipur-Gaisilat road over Nagaon Nalla and Keramali Nallah and a
33/11 KV sub-station at Balitikira in Bargarh district.
These will give a huge boost to rural connectivity and
electrification in the district. A road over bridge will soon be constructed
over the Barpalli level crossing which will ease the traffic situation on the
busy road, said Patnaik after dedicating the projects through
video-conferencing from the State Secretariat here.
“It is our aim to transform Bargarh into a front-runner
district in the state and concerted efforts are being made for its all-round
development. The Gangadhar Meher Lift Irrigation system in the district and
Parbati Giri Lift Irrigation Project at Gaisilat block will cater to the needs
of the farmers and result in good crops and enhanced income for them,” said
Patnaik.
The Chief Minister directed officials concerned to ensure
that all developmental works are completed in time. Welfare programmes for
farmers and weavers in the district should be implemented efficiently and every
beneficiary should avail them, added the CM.
On Monday, Chief Minister Naveen Patnaik announced Rs 1,250
crore worth underground pipeline-based irrigation system namely Bijepur Lift
canal System. This project will irrigate a gross command area of about 32,000
hectares, including 25,600 hectares in Kharif and 7,000 hectares in Rabi
season, said the Chief Minister.
The by-poll is necessitated after three-time Congress MLA
from the constituency Subal Sahu died of cancer on August 22.