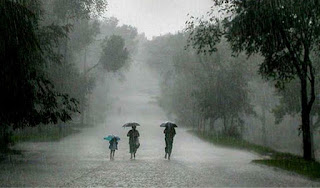 Bhubaneswar, October 17, 2017: The Southwest Monsoon, which
had set in Odisha on June 12, has withdrawn from the whole State on Tuesday,
said the India Meteorological Department (IMD) statement.
The forecast for the
seasonal (June-September) rainfall over the country as a whole issued by the
IMD in June was 98% of Long Period Average (LPA) with a model error of ± 4% of
LPA. Considering the four broad geographical regions of India, this forecast
for the central India, which includes Odisha, was 100%, with model errors of ±
8%.
The forecast for the second half of the monsoon season
(August –September) for the country as a whole was 100% with a model error of
±8% of LPA.
Against the above forecast, Odisha has received an average
rainfall of 1117.7 mm during the period from June till 17th of October against
the LPA of 1207.2 mm registering a shortfall of 7.4% of LPA.
The rainfall of Gajapati district during this period remained
28.2% higher than the LPA whereas 21 districts received rainfall between +19%
and -19% which is considered as normal rainfall, the statement said.
Eight districts namely, Angul, Bargarh, Bhadrak, Bolangir,
Boudh, Dhenkanal, Keonjhar and Jajpur had rainfall deficit of more than 19% of
LPA.
In June, the average rainfall of the State remained (-)3.7%,
in July it matched the LPA, in August (-)17%, in September (-)19.5% and there
was a surplus rainfall of 41.4% of LPA in October till 17th, it
added.
The deficit rainfall in August and September has contributed to
drought like conditions in certain parts of the state.
Going by the Block-wise cumulative rainfall from 1st June to
17th October, 2017, 51 number of Blocks have received surplus rainfall
(>19%), 164 Blocks received normal rainfall (+ 19% to – 19%), 76 Blocks
received deficit rainfall (-19% to -39%), 20 Blocks received severe deficit
rainfall (-39% to -59%) and three Blocks experienced scanty rainfall (shortfall
of >59%).
Three Blocks which have experienced scanty rainfall are
Odapada in Dhenkanal District (-63.0%), Hatadihi in Keonjhar district (-61.8%)
and Belapada in Bolangir district (-61.1%) during this period.
During this period, on an average, there were 55 number of
rainy days having rainfall of more than 2.5 mm per day against the normal 57
rainy days.
x