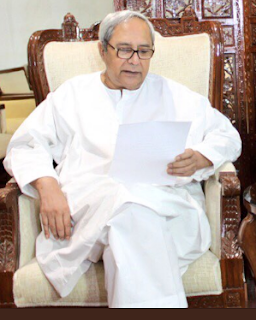 “Agriculture input subsidy will be provided to the small and
marginal farmers who have sustained crop loss of 33% and above at the rate of Rs
6,800 per hectare of land in rainfed/ non-irrigated areas and Rs 13,500 per
hectare of land in areas under assured irrigation,” said Patnaik.
Around 3.15 lakh hectares crop in 70 blocks across 15
districts have been damaged due to drought in Odisha, said sources in the
office of the Special Relief Commissioner.
Maintaining that the assistance will be provided to the
actual cultivators, the CM directed the district administration to keep a close
watch on money lenders and other unscrupulous elements causing financial
hardship to the farmers and also asked police to initiate tough action against
such elements under the Odisha Money Lenders Act and various sections of the CrPC.
Patnaik said agriculture input subsidy will also be provided
to farmers other than small and marginal farmers at the same rates subject to a
ceiling of two hectares per farmer.
“Government of India will be requested to provide interest
incentive of 3% for Medium Term (Conversion) loans i.e., at par with crop loans
for prompt paying farmers,” said Patnaik.
Farmers affected by drought in Kharif will be provided fresh
finance for Rabi cultivation during current Rabi season, which has commenced
from October 1, 2017. Short Term Kharif loans advanced in the affected areas
during Kharif, 2017 having crop loss of 33% and above will be converted into Medium
Term (Conversion) loans.
The due date of Kharif Short Term loans advanced in the
affected areas shall be extended up to September 30, 2018 to facilitate
conversion of such loans into Medium Term (Conversion) loans, Patnaik added.
Patnaik said at least 1.25 lakh pulse mini kits, 0.5 lakh
oilseed mini kits and 0.25 lakh vegetable mini kits will be supplied to the
farmers for the Rabi Programme in the affected villages while 5000 pump sets will
be provided with 50% subsidy limited to Rs 15000 to the farmers.
The district level committees constituted to revive defunct
LI Points should start the work immediately and complete the same by December
31 while MGNREGA works will be taken up by the Panchayati Raj Department to
establish water harvesting structures/ de-silting of field channels, diversion
weirs.
The State Government will provide 50 days of additional work
in drought affected areas, added Patnaik.
Landless, marginal and small farmers in the drought affected
GPs of 70 blocks will be provided livelihood support in terms of backyard
poultry. At the same time, a focused approach will be adopted to take up
intensive fodder cultivation in these GPs through distribution of suitable
fodder kits, the CM maintained.
The CM also waived tuition fees and examination fees in
Government and aided schools and Colleges in drought affected areas while 50%
remission in respect of Cess on land revenue will be given to farmers where the
crop loss is 33% or more.
Collection of the remaining amount will be deferred to the
next financial year without levying any interest while collection of water rate
in drought affected Villages is waived for the current year.

1,300 dwelling units to be built at Satya Nagar