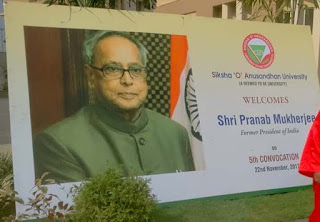 Bhubaneswar, November 22, 2017: Describing research as the
cornerstone of academic endeavour, former President Pranab Mukherjee on
Wednesday said that India must put emphasis on basic research if it has to
emerge as a major knowledge power.
He said Indian universities must fire the power of
imagination of students to make them think beyond the books.
“Quality determines the academic caliber of an educational
institution. Because of our lack of emphasis on basic research, institutions of
higher education in India have lagged behind others in the world. Without such
focus, it will not be possible for us to have our coveted place in the comity
of nations,” Mukherjee said while delivering the 5th Convocation address of the
Siksha ‘O’ Anusandhan (Deemed to be University).
“Indeed without strong research programs, no institution of
higher education can truly accomplish its central mandate of promoting learning
and knowledge,” he said.
Pointing out that the students passing out from IITs are
getting recruited as managers, engineers and technicians all over the world, the
former President said the question whether these premier institutions engage in
basic research did not evoke a “very encouraging response”.
“This explains why none of our universities have found place
in the list of top 200 such institutions of the world,” he said, regretting
that no other scientist working in India has received the Nobel Prize after CV
Raman.
“I don’t agree that Indian students are less intelligent or
there is any dearth of talented teachers. Indians like Hargobind Khorana,
Subramanyan Chandrasekhar and Amartya Sen became Nobel laureates while working
in foreign universities,” Mukherjee added.
Referring to the SOA, the former President said it is highly
commendable for the young university to figure among the top 20 Indian
universities as listed by the National Institutional Ranking Framework (NIRF)
of the Union HRD Ministry.
SOA Chancellor Prof Khageswar Pradhan presided over the
ceremony, which was graced by former Chief Justice of India KG Balakrishnan,
former Union Minister M Veerappa Moily and Head of the National Cancer
Institute, AIIMS, Delhi, Prof Goura Kishore Rath. Vice-Chancellor Prof Amit
Banerjee and Registrar Prof BB Pradhan were present.
Justice Balakrishnan, Moily and Prof Rath were presented with
honorary doctorates by the university.