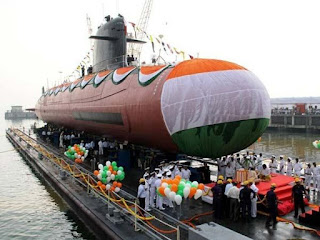 Mumbai, December 13, 2017: Regarded as a very prestigious
acquisition, INS Kalvari- the naval submarine INS Kalvari- will be dedicated to
the nation by Prime Minister Narendra Modi at Mumbai on Thursday.
The INS Kalvari is a diesel-electric attack submarine that
has been built for the Indian Navy by the Mazagon Dock Shipbuilders Limited. It
is the first of six such submarines that will be inducted into the Indian Navy,
and represents a significant success for the “Make in India”
initiative. The project has been undertaken with French collaboration.
The Prime Minister will dedicate the submarine at the Naval
Dockyard, in the presence of the Defence Minister, important dignitaries of the
Maharashtra Government, and senior Naval officers. He will address the
gathering, and undertake a visit of the submarine.
It is the most potent platform to have been constructed in
India. The construction of the Submarine, designated as MDL Yard 11875
commenced with the first cutting of steel at MDL on December, 14 2006.
Kalvari is a potent Man o’ War capable of undertaking
offensive operations spanning across the entire spectrum of Maritime
Warfare.  She embodies cutting edge
technology and compares favourably with the best in the world. She has an
overall length of 67.5 metres and a height of about 12.3 metres.  The hull form, the fin and the hydroplanes
are specifically designed to produce minimum underwater resistance. Her 360
battery cells (each weighing 750 kg) power the extremely silent Permanently
Magnetised Propulsion Motor. Her stealth is further enhanced through the
mounting of equipment inside the pressure hull on shock absorbing cradles.
The Boat’s undersea warfare capability comprises a cluster
of advanced weapons and sensors integrated into the Submarine Tactical
Integrated Combat System (SUBTICS). The sonar suite is Low Frequency Analysis
and Ranging (LOFAR) capable enabling long rage detection and classification.
Post classification, she may choose to engage the enemy by utilising either the
sea skimming SM 39 EXOCET missiles (Flying Fish in French) or the heavy weight
wire guided Surface and Underwater Target (SUT) torpedoes.  Towards self-defence, she is fitted with
mobile C303/S anti-torpedo decoys.
The boats attack and search periscopes are equipped with
Infrared/ Low Light Level cameras and Laser Range finders. The boat also has
her two 1250 kW MAN Diesel Engines for rapidly charging batteries. The
submarine boasts of a highly advanced Combat Management System and a
sophisticated Integrated Platform Management System.
The Ship’s Crest
The crests of all Indian Naval ships depict three sail ships
at the top commemorating India’s rich maritime heritage. This is followed by
the Ashoka Chakra flanked by a Horse and a Bull on either side. The circular
lower part depicts a ring of lotus buds encircling the unique badge of each
ship with her name written in Devnagiri script.
True to tradition Kalvari’s crest is similarly designed. It
depicts Kalvari a Tiger Shark in Malayalam, which symbolises agility, strength
and predatory prowess. The Tiger Shark (Galeocerdo Cuvier) a species of Requiem
Shark found in tropical and temperate waters is a macropredator, capable of
attaining a length of over 5 metres. It is a solitary and mostly nocturnal
hunter whose skin pattern resembles the tiger’s stripes. It is known for having
the widest food spectrum of all sharks, with a range of prey that includes
crustaceans, fish, seals, birds, squid, turtles, sea snakes, dolphins, and even
other smaller sharks. Noticeably the shark is superimposed over both ocean and
sky, alluding to the boat’s capability of engaging both surface and subsurface
targets.
The Ship’s Motto
The submarine’s motto “Ever Onward” epitomises the
submarine’s zeal and indomitable spirit. The motto has been imbibed by the crew
and inspires them to overcome all odds and to never rest on their laurels as
well.

The Ship’s Logo
The submarine’s logo, comprising three distinct yet closely
interlinked elements, truly represent the crew’s single minded focus on
offensive capability. The external ring in grey symbolises the port hole of an
enemy warship. A fearsome steel grey tiger shark representing Kalvari herself
is depicted surging through the enemy porthole with deadly intent. The sea in
the background is aflame subsequent to the attack. The pattern of the waves in
black and orange pays tribute to the Tiger Shark’s namesake the Royal Bengal
Tiger. The boat’s name and pennant number, S-21, which is her distinct identity
amongst other warships is suitably depicted below the motto. The submarine’s
logo is proudly displayed on ceremonial occasions.