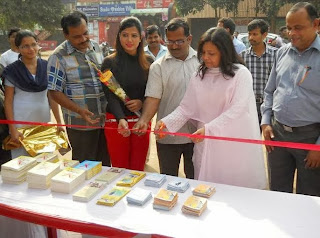 Bhubaneswar: Taking the theme
-Universal acceptance and Human rights, Society for Nature, Education &
Health (SNEH) observed World AIDS Day, 2013 with lots of activities for
awareness generation and prevention of STDs/HIV/AIDS. The activities included a
signature campaign, an awareness stall, quiz competition and short plays on the
theme of HIV/AIDS prevention.
The
programme was inaugurated by Nibedita Nayak, Chairperson, State Social Welfare
Board and attended by Pinky Priyadarshini, Cine Artist, Nandakishore Pattnaik,
Football Coach, Subhransu Pattnaik, Corporator and different sports
personalities and expressed their views about this hazardous epidemic.
The
awareness stall was setup in such a place that large number of trespassers can
participate in the programme. The major aim of the stall was to aware and
counseling to the people about prevention and control of HIV/AIDS and
generating acceptance of the People Living with HIV/AIDS (PLHA). Red ribbon as
the symbol of awareness was pinned to the trespassers coming to the stall.
Leaflets and handouts with information of HIV/AIDS were distributed among the
gatherings.
The
signature campaign was organized near to the awareness stall. The caption of
the signature campaign was ‘Getting to Zero.’ The main aim of this campaign was
to convey the message of HIV/AIDS prevention and shake hands to say no to
HIV/AIDS and generating awareness of acceptance to the people living with
HIV/AIDS (PLHA).
Around
700 people including college and school students had taken part in the campaign
and expressed their feelings on the theme and the hazardous epidemic of the
decade on the signature campaign cloth.
Quiz
competition included the trespassers to the stall. Different questions were
asked to the gatherings and awarded prizes for right answers. The competition
was followed with short skits performed by the adolescent girls of SNEH Shelter
Home. The theme of the play was tospread the message of mis-conception,
transformation, prevention and control. Also, the theme spread the message of
acceptance of People Living with HIV/AIDS (PLHA) and mainstreaming.

Science Express on climate action to remain open from May 9