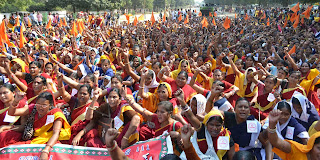 Bhubaneswar: A large number of
Anganwadi workers and helpers under the aegis of Paschima Odisha Anganwadi
Karmi O Sahayika Sangha on Saturday staged a demonstration in front of Assembly
demanding Government employee status to them.
They
too warned to resort to en mass cease work agitation from January 1, 2014.
They
have been demanding minimum wage of Rs 15,000 per month, Anganwadi status for
mini Anagnwadis, implementation of 12th Finance Commission report, recognition
for pre schools and introduction of TA, DA in urban areas and provision of
summer vacation.
“Nearly
15,000 Anganwadi workers working in western Odisha will resort to cease work
agitation if the demands will not be met by December this year,” said Sangha
president Khristbdha Pujahari.
The
Sangha too submitted memorandums to Governor and Chief Minister and Women and
Child Development Department to this effect.