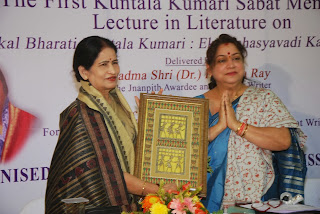 Bhubaneswar: The
First Kuntala Kumari Sabat Memorial Lecture was organised on Saturday under the
lecture series of Central University of Orissa at its main campus at Sunanbeda,
Koraput.
On the occasion the special lecture was delivered by noted
litterateur and Jnanpeeth Awardee Dr. Pratibha Ray. The programme was presided
over by Dr. Prafulla Kumar Mohanty, former Principal of Ravenshaw University
and eminent writer and critique.
Prof. Dr. Surabhi Banerjee, Vice-Chancellor of the
University delivered the welcome address.
On the occasion she gave a brief biography of Kuntala Kumari
Sabat, legend Odia poet of early nineteenth Century, on whom the Memorial Award
is instituted. Describing as the apostle of women empowerment she described
Kuntala Kumari as the symbol of equality. Her creations were marvellous
compared to her time.
She described Kuntala Kumari as the realist poet with the
combination of mysticism and spiritualism. Her mysticism with the combination
of reality is incomparable at that period, i.e. the two decades of twenty first
century.

Puri-Ajmer train flagged off in Puri

Fight for farmers’ cause in Odisha: Union Min to partymen