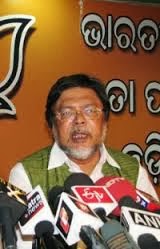 Bhubaneswar: BJP
Odisha in-charge Dr Chandan Mitra called upon the party workers to work hard to
ensure a ‘Congress Mukt Bharat’ and ‘Naveen Mukt Odisha.’
In a well attended meeting of party workers coming from
across the State, Mitra stated that there is conclusive proof of a mining scam
in the st

ate and the complicity of the state is quite conspicuous. It is time
for Chief Minister Naveen pattnaik to face legal action as the Government is a
party to the monstrous scam. Similarly huge unemployment, the deteriorating law
and order situation and acute poverty has undermined the states dignity.

“All this justify ouster of Naveen from power and every one
should pledge to work towards this end,” said Mitra advising the office bearers
to act now and go to people to apprise them about it.
“The party could be benefited if the surge of Modi wave and
the growing popularity for Modi across the country are put into use
facilitating young voters between 18 and 25 to encourage casting their votes,”
said Mitra.
He advised the party dignitaries to set up booth level
committees
Among others Arun Singh, assistant Odisha-in charge, KV
Singhdeo state president attended the meting.