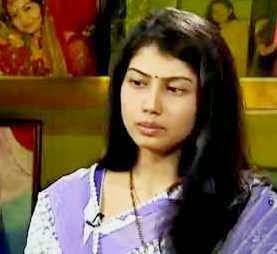 Balasore:  After
receiving an anonymous letter threatening an acid attack on his daughter, Kishore
Kumar Choudhury, father of Barsa Swony Choudhury, the estranged daughter-in-law
of former Law Minister and ruling BJD MLA Raghunath Mohanty on Thursday met Balasore
SP Jayanarayan Pankaj seeking adequate security cover for her daughter, besides immediate action against the culprits.
The threatening came just a few days after the State Human
Rights Protection Cell (SHRPC) of the Odisha Police, which was entrusted to
carry out the investigation, filed a chargesheet against the former minister,
his son Rajashree and three other members of his family in a dowry torture case
in the sub-divisional judicial magistrate (SDJM) court in Balasore.
“The letter has come in my village address which warned that
my daughter would be attacked with acid if she makes any attempt to enter
politics,” Choudhury told mediapersons.
Meanwhile, Balasore SP informed that a FIR was lodged in
this connection and investigation is on to nab the culprits.
Notably, the State Government had provided round the clock security
cover to Barsa Swony after she met Chief Minister Naveen Patnaik on February 21
seeking security. She had filed a dowry torture case against her father-in-law
Raghunath Mohanty, husband Rajashree and others last year alleging dowry
torture.