Skip to content
CM congratulates Odisha police, urges ultras to give up
violence 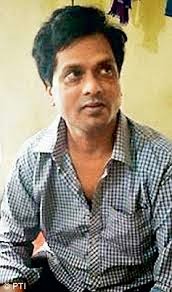 Bhubaneswar: Putting all the speculations to rest, Odisha
Chief Minister Naveen Patnaik on Friday confirmed the arrest of most wanted
Maoist leader Sabyasachi Panda in Berhampur in Ganjam district on Thursday
night.
“Maoist leader Sabyasachi Panda was arrested on Thursday
night in Berhampur. He was involved in killing of Swami Laxmananada Saraswati
and abduction of two Italian nationals. He was also involved in killing 25
security personnel and 34 civilians,” the Chief Minister informed the Assembly
and also to mediaperosns outside the House.
The Chief Minister further congratulated the Odisha police for
arresting Panda and urged the Maoists to give up violence.
Sources said, the top extremist leader was arrested from
Badabazaar in Berhampur town of Ganjam district. Arms, ammunition and Maoist
documents were also seized from him. Police sources said he was apprehended
while he was taking shelter at an aide’s house in Badabazaar.
Sabyasachi, the
topmost homebred Red rebel in Odisha, is accused of several crimes and was wanted
in more than 50 criminal cases, including murder of senior VHP leader Swami
Laxmanananda
Saraswati and four others in Kandhamal in August 2008, kidnapping
of two Italian nationals in March 2012 and killing of over a dozen policemen
and armoury loot in Nayagarh in February 2008.
He also carried an award of Rs 20 lakh on his head. He had formed
his own extremist outfit Odisha Maovadi Party in August 2012, after he was
removed from the outlawed CPI (Maoist), of which he was secretary, Odisha State
Organising Committee, for some years.
Panda was wanted in more than 50 criminal cases, including
the murder of Swami Laxamananda Saraswati and four of his aides in Kandhamal
district in 2008 that had triggered communal violence in the region.