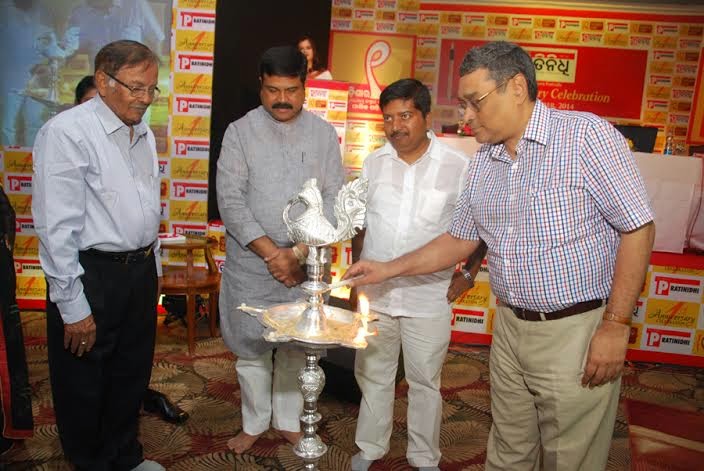 Bhubaneswar, Sep 5: On the auspicious occasion of Guru Divas,
Odisha’s leading Odia fortnightly News and Feature Magazine ‘Ama Samayara Pratinidhi’ celebrated its
first anniversary on Friday.
Attending the function as the chief guest Union Minister for
Petroleum and Natural Gas Dharmendra Pradhan opined that intellectual debate is
necessary for a society for its growth and the role of media is vital in this
context. Citing the example of Santh Bhima Bhoi he said that, the culture and
tradition of Odisha has its own identity.
He expressed his best wishes ‘Pratinidhi’ and hoped it to
uphold this tradition.
Speaking on the occasion as the guest of honour Health and
Family Welfare and Public Relations Minister Atanu Sabyasachi Nayak praised the
effort behind ‘Pratinidhi ‘ and it’s
Chief Editor Sarat Misra.
He said that, quality News and Features should be a part of
magazines like Pratinidhi whose content will help the policy makers.
Speaking on the occasion chief speaker eminent journalist Swapan
Dasgupta stated that, the news which touches the public can only get
acceptability.
“In spite of the presence of international and national
media, still there is huge scope and opportunities for local or regional
language media in India, he added. Day by Day the local idiom, culture,
tradition and issues are drawing public attention. It is an alarming fact that,
with the increase of literacy rate, the reading habit of the public decreases.
Similarly there is nothing like universal culture, rather it can be called as
universal values. Citing the example of Prime Minister Narendra Modi’s
presentation of Shrimad Bhagvat Gita to Japan Prime Minister on his recent
visit to Japan, he said that – it is the essence of Indian values that stands
out,” said the veteran journalist.
He expected ‘Pratinidhi‘
and other regional language media to work in this line to keep up the culture
and tradition of Odisha up.
The chief guest also launched the website of the ‘Pratinidhi.’

10K Odisha youths to get entrepreneurship training this fiscal