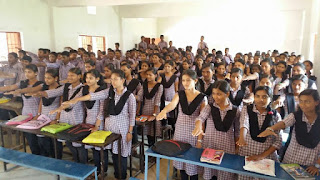 Subarnapur, September 9. 2017: Around 11,985 students, including girls from 39
junior colleges in Subarnapur district took pledge not to allow child marriages
in their areas in functions organised in the 39 colleges in the district.
The main function was organised at the at Biju Pattnaik Women’s
College where, District Collector Dasarathi Satapathy, who happens to be the
nodal officer for Prohibition of Child Marriage Act administered the oath to
the students.
“At least 39 junior colleges are organising similar kind of
meeting at the same time involving around 11,985 students for the cause of
combating child marriage with the support of Child Development Protection Unit
and Beti Zindabad of ActionAid,” said the Collector.
Quoting the National Family Health Survey-4, Ghasiram Panda, programme
manager of ActionAid who also attended the main programme at the Biju Patnaik Women’s
College said that that 22.2 percent girl are getting married below the age of
18 and only 26 per cent are completing 10 year of schooling in Subarnapur.
“This high prevalence of child marriage also causes high IMR
and MMR. Though child marriages are so prevalent, cases are not being reported
as the child marriage prohibition officers who are the CDPOs not aware of their
roles,” observed Panda.
The efforts taken by the district is unique of its kind and
nowhere in the state such has a grand mobilisation taken place to combat child
marriage.
Among others DLC Dr Prafulla Ratha, DIPRO Bhujanga Rao, DSWO Manoj
Manjari Pahi, DCPO Chaturbhuja Das, and Biju Patnaik Women’s College Principal attended
the event.