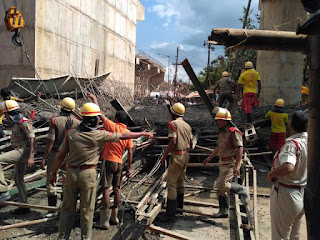 Bhubaneswar, September 10, 2017:
One person was killed and more than 15 injured as a major portion of an
under-construction Bomikhal Flyover collapsed in a congested Bhubaneswar-Puri National
Highway on Sunday afternoon.
Around 15
labourers were casting the span when the span of the bridge caved in.
Search
operations are underway to check if any labourer is trapped under the collapsed
Span. NDRF, ODRF, FIRE units were engaged to carry out the rescue operation
while four ambulances were pressed in service to transport the injured to
hospitals.
The deceased
was identified as Satya Patnaik (40). Patnaik’s daughter identified as Ishu has
also been severely injured in the mishap and rushed to the hospital, sources
said.
Meanwhile, Works
Secretary Nalinikant Pradhan put two senior engineers, Deputy Executive
Engineer Bansidhar Prahraj and Assistant Engineer Kishore Rout under suspension.
Expressing grief,
Chief Minister Naveen Patnaik announced ex-gratia of Rs 5 lakh for the kin of
the deceased. He also announced free medical treatment for the injured. He
ordered a high-level probe in the mishap too.