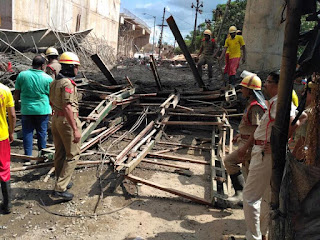 Bhubaneswar, September 10, 2017:
Senior Congress leader and Leader of Opposition (LoP) Narasingha Mishra on Sunday
held Chief Minister Naveen Patnaik accountable for the collapse of a major
portion of an under-construction flyover killing one person and injuring many others.
One Satya
Patnaik of Jharpada area was killed in the mishap while his minor daughter was
seriously hurt when the span of the bridge collapsed on them. The deceased was
returning home along with her daughter Sheetal in a scooty when the tragedy
happened.
“The
deceased was the breadwinner of the family. Seventeen others have been injured as
reported so far. As in charge of the Works Department, the CM is to owe the moral
responsibility,” said Mishra after visiting the accident site and the Capital
Hospital where the injured were undergoing treatment.
“I am of the
view that this is a case of culpable omission and whoever is responsible is
liable to be booked under Sec 304 of IPC. Immediately, a case should be
registered and the culprits should be booked and arrested. No doubt  the
prime  accused  is the
contractor   for whose  omission
the  incident   took
place, but  the  Departmental
officers  in charge of supervision  cannot
escape the liability,” added Mishra.
He also demanded
Rs 1 crore for the family members of  the
deceased and Rs 1 lakh each  of   the injured persons.
Meanwhile, senior
BJP leader and Union Petroleum and Natural Gas Minister Dharmendra Pradhan expressed
grief for the mishap and tweeted that exemplary action should be initiated against
those responsible for the mishap.
At around
12.30 pm, a major portion of an under-construction flyover at Bomikhal caved in
killing one person on the spot and injuring more than 15 others, including few
labourers and a minor girl.