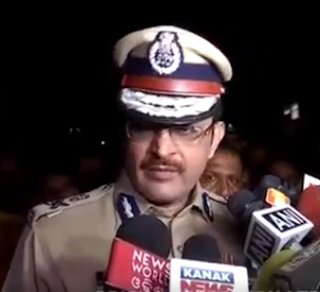 Bhubaneswar, September 10, 2017:
Director General of Police (DGP) Dr Rajendra Prasad Sharma on Sunday assured of
stern legal action against those responsible for the collapse of a major
portion of an under-construction flyover near Bomikhal in Bhubaneswar killing
one person on the spot and injuring many, including a minor girl.
Sharma after
visiting the accident site made it clear that the Commissionerate Police would register
a case in this regard and action would be taken against the guilty.
“The
Commissionerate Police will register a case in this connection. The mishap
amounts to criminal negligence. Action will be taken against the guilty,” Dr
Sharma told reporters.
Meanwhile,
Chief Minister Naveen Patnaik directed a high-level probe into the mishap and suspended
two engineers – Deputy Executive Engineer Bansidhar Prahraj and Assistant
Engineer Kishore Rout of the Works department.
At around
12.30 pm, a major portion of an under-construction flyover at Bomikhal caved in
killing one Satya Patnaik of Jharpara area on the spot and injuring more than
15 others, including his minor daughter Sheetal and a few labourers.