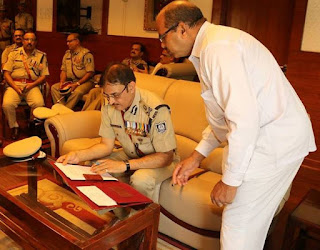 Bhubaneswar, September 12. 2017: A helicopter carrying Odisha Director General of
Police (DGP) Dr Rajendra Prasad Sharma and other senior top cops of the State was
forced to land under emergency conditions at Begunia in Khurda district due to
bad weather on Tuesday.
Sharma along with Intelligence Director Sunil Roy and IG (Operations)
RP Koche after taking stock of the anti-Maoists operations in Kandhamal was
returning to Bhubaneswar in the Pawan Hans helicopter when the pilot was forced
to make emergency landing at Gopabandhi High School Ground in the afternoon
after the weather suddenly turned bad.
As soon as the DGP came out of the copter, he was flocked by
children playing there and later was attended by the district police officials.
The helicopter has reportedly not suffered any damage.