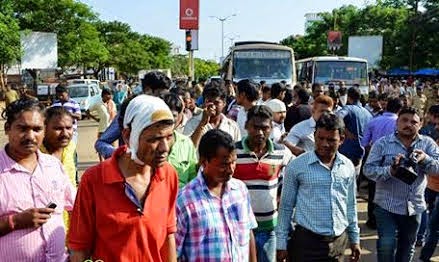 Bhubaneswar, Aug 24:  Two TV journalists sustained severe injuries
after a mob of around 30 persons attacked them suddenly with iron rods, bhujali
and other weapons while they were collecting reports here near KIIT University
on Sunday.
The mob also damaged
their Maruti Omni Van completely. Following the attack, a large number of
journalists blocked the road in front of Big Bazaar shopping mall at Patia for
few hours demanding immediate arrest of the culprits.
Bhubaneswar DCP
Nitinjit Singh along with senior police officials rushed to the spot and
managed to pacify the agitation.
“We received a
complaint from the victims and are now examining the video footage of the
happenings recorded by the cameraman and strict action would be initiated
against the culprits,” informed the DCP.
“Some senior citizens
informed us about a land scam and requested us to come to the spot
for investigation. When we reached the spot and started taking visuals a mob of
30 people with the help of children suddenly attacked me on my head with an
iron rod and also beat me,” said victim TV journalist Raghunath Sahoo, who
sustained severe head injury.

None from Odisha reported dead in Utkal Express tragedy, 5 hurt