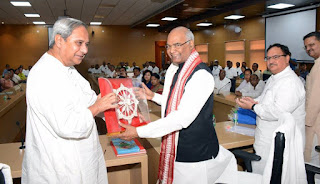 Bhubaneswar, July 14: Hailing NDA Presidential candidate Ram Nath Kovind
for his hard work, determination and commitment to the cause of the oppressed
and the downtrodden, Chief Minister Naveen Patnaik on Friday said Kovind is symbolic
of the new aspiring Indian.
Patnaik while introducing Kovind to his party MLAs and MPs
at the Assembly conference hall during the latter’s Odisha visit to seek
support in favour of his candidature said that born in a poor family in a
remote village in Uttar Pradesh, Kovindji rose to great heights as Advocate on
Record in the Supreme Court, a reputed leader in the Upper House of Parliament
and the Governor of Bihar.
“What sets him apart is his hard work, determination and his
commitment to the cause of the oppressed and the downtrodden. His journey from
humble beginnings in a village in North India to being a candidate for the
highest office in the country is a true reflection of the transition that modern
India has undergone,” said Patnaik.
Maintaining that he is symbolic of the new aspiring Indian,
Patnaik said, “His path reflects the strength of our Constitution which
guarantees every Indian the right to dream big irrespective of caste, creed or
religion.”
“The Biju Janata Dal has as its core, the values of
empowerment of tribals, scheduled caste, women, children, farmers and youth
leading to a progressive and prosperous Odisha,” said Patnaik.
Kovind who was on a one-day visit to Odisha, on Friday met
ruling BJD MLAs and MPs at the Assembly conference hall.
The meeting lasted about an hour. Before the meeting,
Patnaik, Kovind and Union Health Minister and senior BJP leader J P Nadda who
accompanied the Presidential candidate to Bhubaneswar raised hands in unison. After
the meeting, Patnaik took Kovind and Nadda to his residence in his official car
where the trio had lunch.
“I am very happy to be here and thankful to the BJD led by
Naveen Patnaik for supporting me,” Kovind told reporters after lunch with the
CM. The trio spent around an hour at Naveen Niwas for the luncheon meeting with
Patnaik.
When asked about cross-voting, Patnaik said, “BJD is
supporting Kovind as Presidential candidate and I don’t think there’s chance of
cross voting at all.”
Kovind was earlier welcomed by leaders of both BJD and BJP
at the Bhubaneswar airport on his arrival by a special flight.
Kovind’s meeting with BJD legislators and MPs was considered
as a mere formality as Patnaik had already announced his party’s support to the
NDA nominee describing him as a “distinguished dalit leader.”
The ruling BJD has 117 MLAs in 147-member Odisha Assembly
and 28 MPs (20 in Lok Sabha and eight in Rajya Sabha).
After having lunch with the CM, Kovind met BJP MLAs and
leaders at the party’s legislature party leader KV Singhdeo’s residence before
leaving for New Delhi.