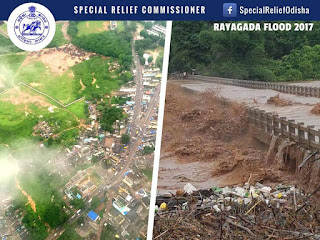 Bhubaneswar, July 16: Due to incessant rainfall on Saturday,
flash floods occurred in river Nagabali and Kalyani of Rayagada district
affecting 12 villages in Kalyansinghpur and Rayagada blocks. Three bridges were
also washed away resulting in disruption of road communication due to flood.
Flood water is flowing above the Rayagada-Andhra Pradesh road
while railway bridge between Therubali and Singapur road station has been
washed away.
Two ODRAF teams, fire services and CRPF have been deployed
for relief and rescue operation while four helicopters of India Air Force (IAF)
have been requisitioned for air dropping of food packets in the marooned areas. 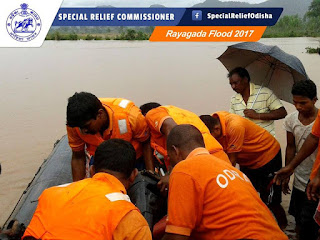 Around 2,000 food packets are in readiness for air dropping.
Packaging of food packets is being done at Rayagada Town Hall, a Special Relief
Commissioner (SRC) communiqué said. ​The administration has opened two free
kitchens at Majhihada High School and Kalyansinghpur ME School covering 1,300
beneficiaries, it added.
Rayagada district Collector has been instructed to provide seven
days’ emergent food assistance.
​Meanwhile, the SRC requested the National Disaster Response
Force (NDRF) Commandant, Mundali to send 3 units of NDRF with equipment and boats
to Rayagada to carry out the rescue and relief operation.
All neighboring districts of Rayagada have been instructed
to provide the required manpower and material support to Rayagada district
while all schools of Kalyansinghpur block will remain closed.
The students of Budaguda Ashram school are safe. Water level
in Nagabali is receding as rain has stopped.
Earlier in the day Chief Minister Naveen Patnaik took stock
of the situation at the SRC office where SRC Bishnupada Sethi, Development
Commissioner R Balkrishnanan among many senior Government officials was present.
Following the CM’s meeting two meetings were held under the
chairmanship of the Development Commissioner at 1 pm and 5 pm at the State
Emergency Operation Centre with the departments Secretaries to coordinate the
response activities in the flash flood situation in Rayagada district.
​