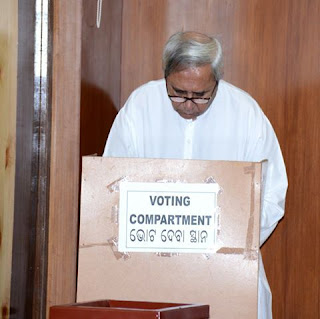 Bhubaneswar, July 17: Ram Nath Kovind or Meira Kumar? Who
will be the India’s 14th President? As many as 776 MPs and 4,120 MLAs from
across the country, including 147 from Odisha, will decide in a secret ballot
vote today. Voting began at 10 am today for a battle that the 18 opposition parties
have pitched as “ideological”.
Meanwhile, polling began at 10 am at
the State Legislative Assembly where 147 legislators will cast their votes amid
fears of cross voting.
Chief Minister Naveen Patnaik, and senior Congress leader
and Leader of Opposition Narasingha Mishra cast their votes at the Assembly. Mishra
was the first person to cast his vote.
“It was a pleasure participating in the democratic process
of the Presidential election. I wish the next President of our country every
success and an accomplished tenure in safeguarding the constitutional values
for the people of the nation,” said Chief Minister Naveen Patnaik after excising
his democratic franchise.
Polling is being held at room number 54 of the Assembly. The
voting will continue till 5 pm. The results will be out on July 20.
The ruling BJD has 117 MLAs in 147-member Odisha Assembly
and 28 MPs (20 in Lok Sabha and eight in Rajya Sabha). BJD has supported the NDA’s
nominee Kovind.

Jaga completely out of danger!