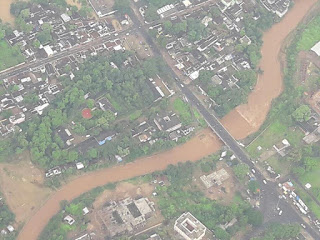 Bhubaneswar, July 17: Around 38,500 people of 80 villages in
nine blocks in Rayagada and Kalahandi districts have been affected due to flash
floods that came in Nagabali, Kalyani and Hati since Sunday. Two persons were
killed due landslide and drowning in Kalahandi district while five people
sustained injuries in both the districts and undergoing treatment at several
hospitals.
“While more than 28,000 people in 50 villages under Rayagada
block and 20 villages under Kalyansinghpur block have been affected due to the
flash floods five persons have been injured due to wall collapse in Rayagada
district. Extensive damage has occurred to four PWD and other roads,” said a
Special Relief Commissioner (SRC) communiqué. 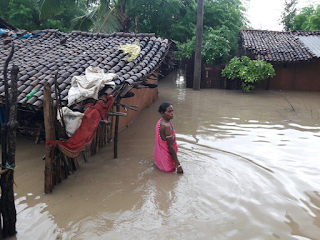 About 4,000 people were evacuated and lodged in 15 temporary
shelters where cooked food is being provided to them at free kitchen centers.
Emergent relief in shape of rice Dal, Chuda, Gur, biscuit, Candles and Match
Box has been provided to 5,166 beneficiaries by the Rayagada district
administration. At least 828 food packets have been airdropped by Naval
helicopter. Besides, 4,000 food packets have been distributed to affected
people.
While ten health camps were set up in Rayagada block five
such camps were set up in Kalyansinghpur block. Ten drinking water sources were
disinfected. Five Mobile Veterinary Units have been mobilized. All schools of
Kalyansinghpur, Rayagada and Kasipur Blocks were closed for three days.
Due to heavy rain in Thuamulrampur, Kalampur, Koksara and
Jaipatna blocks in Kalahandi, floods occurred in river Hati and Tel affecting
over 10,500 people in ten villages of seven blocks have been affected by this
flash flood.
“Free kitchen services have been provided to 384 persons. Two
ODRAF teams have been deployed. 17 persons have been rescued at village
Taratikili of Bhawanipatna block. All schools of the district have been closed.
3 Mobile Veterinary Teams have been deployed in the affected areas. Extensive
damage has occurred to PWD and other roads,” added the release.
In the meantime, the flood situation has improved as flood
water has significantly receded in both Rayagada and Kalahandi districts. All
PWD roads have opened to traffic. The administration has geared up for the
relief measures. After abatement of flood, immediate steps shall be taken for
assessment of damages and payment of admissible assistances to the affected
people/ families, it added.

26 more Chilika Fresh Outlets to be set up in city