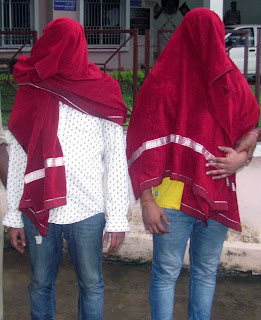 The fresh arrest came almost
six months after the arrest of the two mafia siblings on January 29.
Commissioner of Police Yogesh
Bahadur Khurania told reporters here that Lipuna alias Debadutta Das and
Chandan Behera of the city were arrested from their hideouts in Kolkata on the
strength of NBWs obtained against them. Both were produced in court on
Saturday. police also seized Rs 70,000 and mobile phones from their possession
at the time of arrest.
Khurania said while one
of the arrested was wanted in an alleged twin murder of November 2013 and the
other in a pulse trader murder of November 2014.
With the fresh arrest,
the number of arrests in connection with the gangster Dhalasamanta brothers has
reached 35.