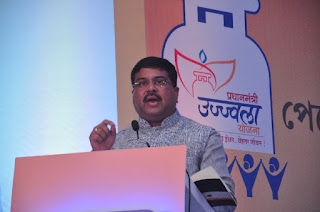 New Delhi, July 30: Union
Petroleum and Natural Gas Minister (PNG) Dharmendra Pradhan on Saturday convened
a meeting with all District Nodal Officers (DNOs) of eastern States and north eastern
States for successful implementation of Pradhan Mantri Ujjwala Yojna (PMUY) under
which LPG connections are given to women of BPL households.
Nearly 250 DNOs, senior
officials of Ministry and Oil Marketing Companies attended the meeting.
The DNO meet was first
such meeting organised to provide an opportunity for experience sharing by DNOs
in implementing the scheme.
The DNOs shared their
experiences in implementing the scheme which included massive communication
strategy to educate prospective beneficiaries, enrolment of beneficiaries,
strengthening of infrastructure and coordination with elected representatives and
local administration.
DNOs also highlighted
the steps taken by them to educate beneficiaries on safety measures and
insurance cover available. A few DNOs highlighted the difficulties faced in the
field.
The Union Minister asked
the DNOs to be more vigilant on involvement of any middle man and directed to
reach out to every beneficiary. He further stressed on the need of ensuring
quality services to all LPG consumers.
The Minister directed
all DNOs to organise distribution melas from August 15 involving freedom
fighters to mark the 70th Independence Day.
The Pradhan Mantri
Ujjwala Yojna was launched on May 1. A total of 23 lakh connections have been
issued so far under PMUY.