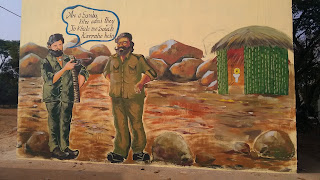 Bhubaneswar, Dec 8: Art connects people, but now it will make
awareness on cleanliness and try to stop open defecation. Themes from real and
reel life are incorporated to make people more interested to use toilets. 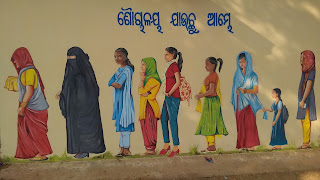 The Bhubaneswar Municipal Corporation (BMC) has taken the
innovative art route to keep the city clean. For the civic body, the walls of
the public toilets have become the canvas for communication, and the arts on
them are trying to tell people to stop open defecation.
To begin with, two public toilets at the Janata Maidan have
been painted with different images telling people to stop defecating in the
open. The city-based Bakul Foundation is doing the artwork for the civic body.
The BMC would replicate the idea with 23 more public and 18
community toilets across the city. During the Make In Odisha Conclave at the
Janata Maidan recently, the two painted public toilets attracted public
attention.
“We are also planning to paint all the 27 more public toilets
and 26 community toilets. Once the entire exercise is done, in all the existing
43 toilets and 53 upcoming ones, 96 toilets will have the message through
art,’’ said BMC Deputy Commissioner Srimanta Mishra.
The front of each toilet is painted in blue stripes to convey
the association with water and sanitation, but in the stripes, a pan has been
created. This pan drawn in stripes is a common motif in the paintings. Another
common motif is the commode with a sunflower as its back rest.
Artists Smrutikanta Rout, Sai Satyaranjan Sahoo, Amarjyoti
Degal and many others were engaged to do the paintings.
In the attempt to make the familiar unfamiliar in conveying
the message, Gabbar Singh of the film Sholay is presented along with Samba,
with Gabbar pointing the gun and asking, “Kitne aadmi the jo khule mein
sauch kar rahe hain.” And in the familiar image of Gabbar in the hilly
ravines, he has a toilet (again a commode with a sunflower back).
This commode with sunflower motif is in another painting,
where it is the highlight; and because of the toilet, there is a garden of
flowers around it. In another image, Superman presented here as `SuperPan’ has
as his symbol, the same commode with a sunflower back. The `SuperPan’ is a
superhero almost looking like Superman who fights `KitanuMan’ (bacteria and
viruses) with a hand-wash that he sprays on him.
Similarly, another painting with women of all hues and
diversity (modern and traditional, Hindu and Muslim, rich and poor) were shown
in a queue and asked to guess where this painting was. Some people thought it
was an ATM, and some finally guessed it was at a toilet.
In another image, a satire, men are shown urinating just
below a “Don’t Urinate’’ sign and others moving away unable to bear the smell.
The cheeky line asks, “Will you be like them or go inside the
toilet?”