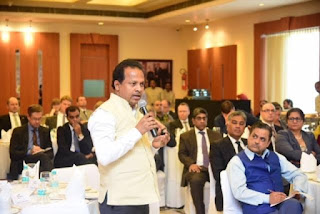 Bhubaneswar, Dec 6: In an interactive session with the German
delegation including Uwe Beckmeyer, State Secretary, German Federal Ministry
for Economic Affairs and Energy at FICCI in New Delhi, Balasore MP Rabindra Kumar
Jena on Tuesday stressed on Indo-German ties especially Odisha-German business
ties. A group of British MP was also present at the meeting.
Speaking at the meeting Jena said “German and Indian business
firms need to work closely for greater good of both the countries. GST will be
a definite further boost for the Indo-German business houses.”
The MP also explained
how Odisha has been striving to create a conducive environment for business
houses and has one of the most efficient single window clearance systems in
place. The recent ‘Make In Odisha Conclave’ and ‘Odisha Industrial Policy-2015’
was also a part of the discussion at the meeting.
It is noteworthy that as a response to Mr. Jena’s demand for
Odisha-German partnership, the Secretary replied that they will do their best
to work with India and Odisha in the future. An Indo-German defence tie was
other matter of discussion at the occasion.