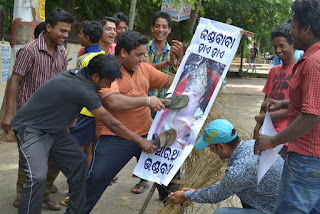 –Sarathi Baba in ‘scandal’–
Kendrapara, August 5: Tension erupted at Barimula-based at
the self-proclaimed godman Srimad Sarathi Baba Ashram in Kendrapara district after
police personnel on Wednesday evening resorted to mild lathi charge to disperse
the irate mob who was demanding clarification from Baba about the explicit clippings
telecasted in a regional TV channel.
While policemen guarded the gates of the ashram, protesters
raised slogans against the god man and burnt his effigy. Protesters were seen
tearing the hoardings in front of the ashram.
Earlier, on Wednesday morning, hundreds of locals along with Bajrang
Dal activists burnt tyre on Gulnagar-Indupur road in front of Sarathi Ashram and
also burnt the effigy of the self styled god man.
To maintain law and order, one Additional SP, four DSP and
three Inspectors, and two platoons of police force and an Executive Magistrate
have been deployed in and outside the Ashram premises.
For the first time since controversy broke out after a
television channel purportedly showed him in jeans and T-shirt staying in a
posh Hyderabad-based hotel with a young woman for company on Tuesday, the controversial
self-styled spiritual guru on Wednesday admitted that he does wear pants and
shirt when he goes outside the state to avoid public attention.
“After all, even Swami
Vivekananda too wore pants, coat and tie when he went outside,” asked Sarathi
Baba when quizzed.
He, however, flatly denied the assertion made by the channel
that the pictures showing him in jeans and T–shirt were from Golconda Hotel in
Hyderabad.
Meanwhile, Kendrapara Collector asked the SP to conduct probe
on the complaint filed by Aul MLA Debendra Sharma.