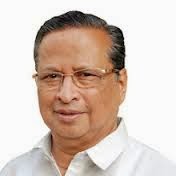 Bhubaneswar, Jan 21, 2015: Former PCC President Niranjan Patnaik
has reacted strongly to the news that Odisha has become one of the worst
performing states in the nation-wide Tiger census released by the Union
Environment Ministry.
“While the total tiger population in the country has
increased from 1706 in 2011 to 2226 in 2014, showing a 30 percent rise, the
number of tigers in Odisha has declined from 32 to 28,” said Patnaik in a press
release, adding that the issue is not about tiger alone, the more substantive
issue is the number of tigers is an indication of the overall state of the
environment as Tiger occupies the top of the pyramid in the animal food chain.
Patnaik said deforestation has become rampant and the corridors
between different tiger habitats have been totally degraded. The Government has
failed to stop poaching of not merely Tigers, but even the prey and with
merciless cutting of trees and illegal mining; the king of the jungle is
becoming extinct from the state.
“While states like Karnataka, Maharashtra and Madhya Pradesh
have shown spectacular success, the BJD Government’s performance in managing
Odisha’s environment and wildlife has been an abysmal failure.”
“The State Government is equally clueless when it comes to
managing the state’s elephant population. Man-animal conflict has become an
epidemic with poor farmers incurring huge damage to crops and many human lives
getting lost as well as elephants getting killed.”
“It seems Naveen Babu will wake up when elephants come
calling on the Odisha Secretariat or Naveen Niwas.”